History of the Town of Mount Pleasant

Mount Pleasant has been a rest stop, a college town, and a mill town. The region has a rich and fascinating history that is worth learning more about. Visit the Eastern Cabarrus Historical Society Museum to learn more www.echsmuseum.org

Where the Buffalo Roamed 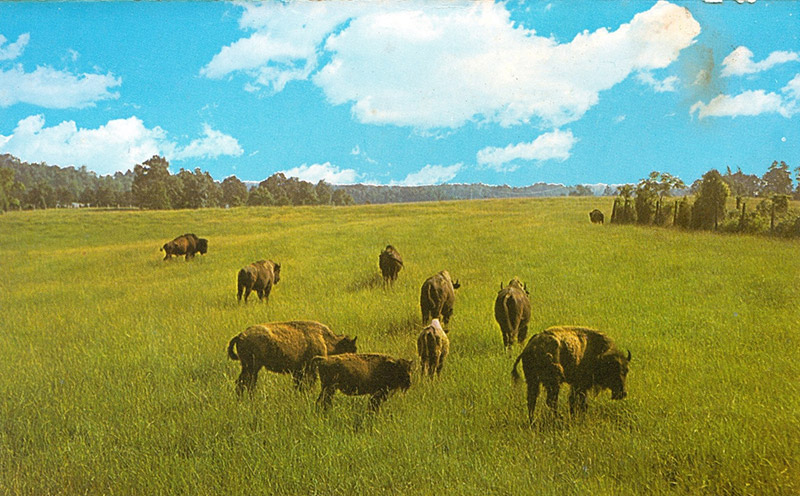 Did you know that the American Woodland Bison (buffalo) used to roam in the southern Piedmont of North Carolina, including what are now Cabarrus, Rowan, and Stanly Counties? Early settlers, prior to 1750, described frequent sightings of buffalo and their tracks. Herds of buffalo roamed back and forth between the Yadkin River and Catawba River basins along creeks. On the western side of Cabarrus County where the Ulster Scots (Scots-Irish) settled there is a creek called Irish Buffalo Creek. On the eastern side of Cabarrus County, where the Germans (Deutsch/Dutch) settled, there is a creek called Dutch Buffalo Creek. As the piedmont savannah prevalent in the area began to be farmed, the bison disappeared after about 50 years. You can see an example of piedmont savannah at the Buffalo Creek Preserve portion of the Carolina Thread Trail (7911 Malibu Road, Mount Pleasant). Two centuries later in the 1960s-1990s there was a Buffalo Ranch operated by the Cooke family just west of Mount Pleasant on Highway 49 that was a huge tourist attraction and rite of passage for youths across the region. Visitors could imagine what the landscape looked like centuries ago.

A Tale of Two Churches 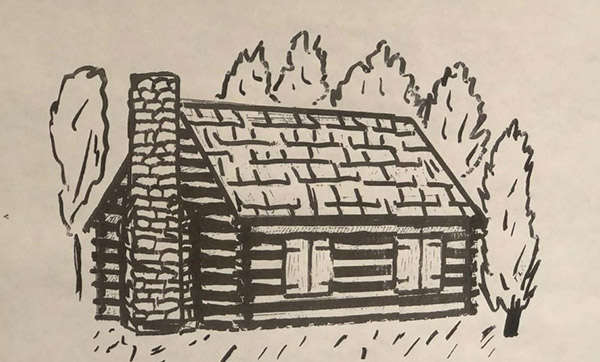 Eastern Cabarrus County and the surrounding area was largely settled by Germans. Immigrants from the Rhine River Valley of Germany entered Pennsylvania and when tillable soil became scarce, many settlers headed 500 miles south down the “Great Wagon Road” to what was Bladen County at the time. These Germans were primarily adherents to the Lutheran and German Reformed Church traditions and many chose to settle on the banks of Dutch Buffalo Creek and its tributaries. In 1745, the congregants of these two churches worked together to construct the first log Dutch (Deutch) Buffalo Creek Meeting House (Haus). The facility served as both a church and a school. They had to call it a meeting house since the Anglican Church was the official church of the British colonies at the time. As the population of the area grew, the Lutherans formed St. John’s Lutheran Church to the west and the German Reformed congregants formed Bethel Bear Creek Reformed Church to the east. Many early texts of the churches were in written in German and German culture was prevalent with the early settlers. The presumed site of the original Dutch Buffalo Creek Meeting House is marked by an obelisk monument (erected in 1894) and early graves on private property just above the northeast quadrant of Mount Pleasant Road North and Fisher Road, north of present-day Mount Pleasant.

There’s Gold in Them There Hills 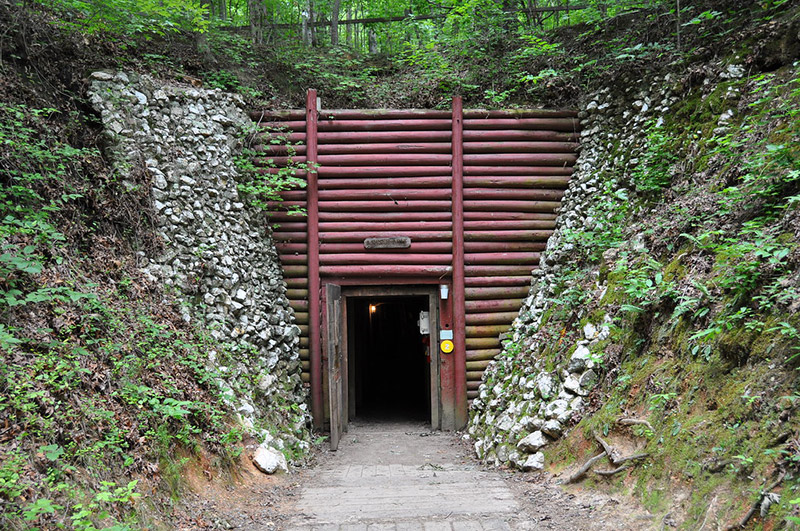 Entrance to Reed Gold Mine

In 1799, the first documented gold discovery in the United States happened right here in Eastern Cabarrus County. Twelve-year old Conrad Reed, the son of German Hessian soldier John Reed (Johannes Reith) found a large yellow rock in Little Meadow Creek near present day Midland, NC. After using the 17 pound rock for a doorstop for three years, the Reed family took it to a jeweler from Fayetteville who paid the price of $3.50, one-tenth of the mineral’s true value. The following year John Reed started a mining operation, spurring the first American gold rush. Mines sprung up all over the region, leading to booming settlement like nearby Gold Hill, NC. To learn more about visiting and learning more about regional gold mines visit the Gold Rush Tour page on this site. 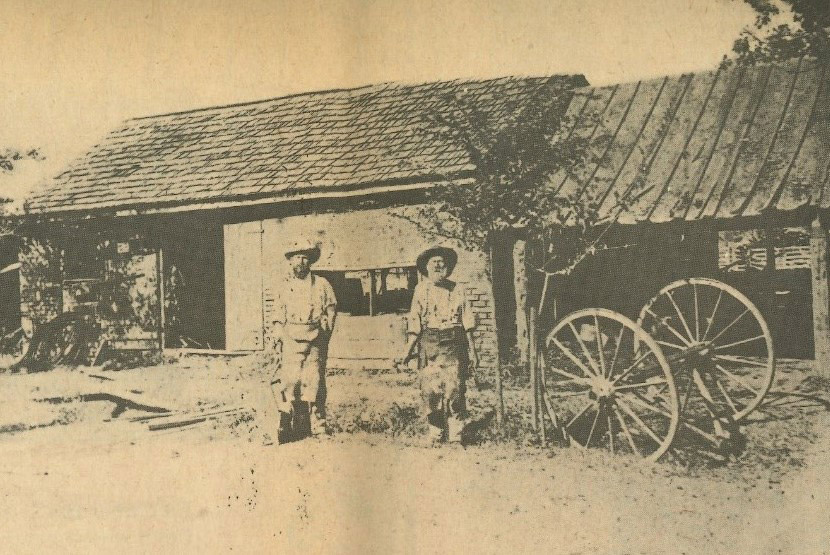 Local tradition maintains that in the mid-1700s, a campsite called “Mount Comfort” provided a stopping place between Salisbury and “Charles Town.” Over the years, this location became a stop for wagons and weary travelers along the arduous route. It later emerged as a small village in the 1830s, named Mount Pleasant because of its picturesque

location and its high elevation between Adams and Buffalo Creeks. To this day, Mount Pleasant is a nice place to stop and stay a while. 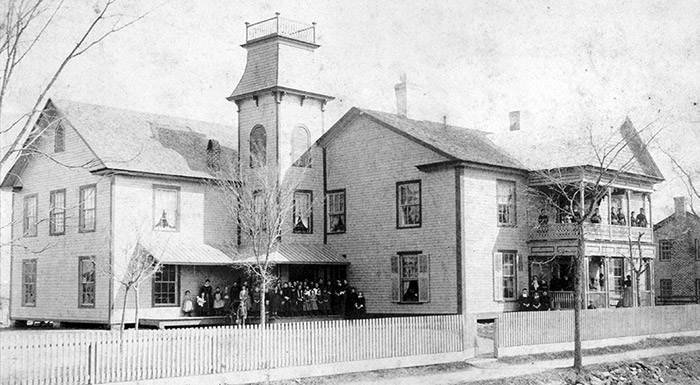 In the mid-1850s, the North Carolina Lutheran Synod opened what was first called the Western Carolina Male Academy and was later recharted as North Carolina College and was briefly named the Carolina English & Classical School. Operating continuously except for interruptions during the Civil War and in 1902, Mount Pleasant Collegiate Institute (MPCI) operated from 1903 until 1933 as a men’s preparatory school. The school could not survive the Great Depression and closed leaving its empty campus on North Main Street in Mount Pleasant. Today the Mount Pleasant Collegiate Institute comprises its own National Register Historic District and is the home to the Eastern Cabarrus Historical Society Museum. Hundreds of people visit the museum every year to learn more about the region.

Mont Amoena Seminary (orginally Mount Pleasant Female Seminary) was a female Christian-based classical liberal arts school that operated on South Main Street in Mount Pleasant from 1859 until 1927. The original building, which had been enlarged in 1898 burned down in 1911. In 1913 a new brick building was constructed and was used until the doors closed in 1927. 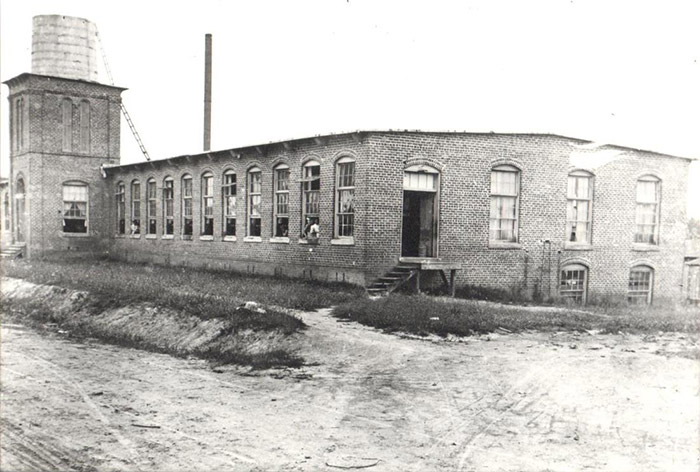 By 1872, there were eight grist mills and four general stores with Mount Pleasant addresses. The general stores were File & Harkey; Jones, Cook & Company, Kinerly & Cox; and Misenheimer & Company. The Lentz Hotel in operation since 1853, received competition from the Bangle House in 1878. By 1884, the number of area general stores reached seven, plus two druggists, a lumber merchant, and a liquor merchant. These structures in Mount Pleasant reflect the community’s diversification that began in the late nineteenth century.

In 1890, with a population of 550, Mount Pleasant was about to embark on a period of manufacturing development that would be more significant than its earlier commercial expansion. Four major industries emerged in Mount Pleasant during this period. The first two, Kindley Cotton Mill (incorporated in 1896) and the Tuscarora Mill (organized in 1899), were initially yarn mills. The establishment of these mills occurred simultaneously with a growth of the Cabarrus County textile industry. With the development of cotton as a staple crop, and with the revitalization of the North Carolina Railroad; towns with rail connections, such as nearby Concord, became textile industrial centers. Some of the Concord merchants, who deal in this activity became wealthy enough to launch their own manufacturing plants. One of the most prominent of these merchant-industrialists, James W. Cannon, founder of Cannon Mills, also established and served as the president of Mount Pleasant’s Tuscarora Mill. However, the Kindley Mill was a local enterprise, headed by farmer and merchant W.R. Kindley, and also included Lawson G. Foil, A.W. Foil, L.E. Heilig, J.L. Peck, A.W. Kindley, and the Reverend Paul Barringer as incorporators. Barringer was also involved with Cannon in the Tuscarora Mill. Other local investors in the Tuscarora Mill included John Foil, Lawson G. Foil, Jonas Cook and Augustus C. Barrier. Together these local merchants and farmers owned the controlling block of stock in the company.

In 1897, the Mount Pleasant Lumber Company, began to consolidate a number of local sawmills. John L.C. Miller and six other investors, formed a corporation, purchased the site of a saw and planing mill established by John Frick in the 1890s, and commenced business. Miller eventually bought out his partners and assumed complete control of the company in 1917. Miller Lumber Company still stands at its original location after being rebuilt when a fire was caused by a lightning strike in 2013.

In 1908, the Mount Pleasant Milling Company was constructed as a steam mill in 1908 by John and Lawson G. Foil. The Foils, with Jonas Cook, were proprietors of a general store in Mount Pleasant. The mill was purchased in 1918 by Charles Crowell and he converted the mill to electric power in 1922. Like its predecessors, the Mount Pleasant Mill Company first ground wheat, barley, oats, and corn.

In 1912, the Mercantile General Store was constructed at the corner of Main Street and Franklin Street. Twenty years later, in 1932, the building was converted to the Mount Pleasant Hosiery Mill and operated until in closed in 2009. The building now houses 73 & Main Restaurant and the Old Well Brewery.